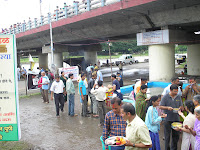 Every year, we look forward to the Ganapati festival. Ganesh mandals continue to proliferate at a rapid pace, I counted five in a space of 100 m in under the Paud phata flyover.
Each year, civic authorites urge people to immerse the idols in specially prepared 'houd' (tanks) so as not to pollute the river. This year I found volunteers of 'Yugpath' (a youth organisation) on hand to collect 'Nirmalya' and even kept satistics of the number of idols immersed in the tanks. (The photo above shows the tanks set up beside the river)
We did not really think what would happen to the idols thereafter. The ones made from 'Shadu' ( a type of river mud) were meant to dissolve yet a large number are also made of Plaster of Paris. They obviously would not dissolve. We left it to the God to fend for himself mainly from the Pune Muincipal Corporation it would seem.
According to reports in the Pune Mirror, the PMC is supposed to transfer the PoP idols to a quarry nearby (Pune Mirror did not find any evidence of that). They actually ended up throwing the idols back into the river which by the next day did not have much water. I shudder to think of the condition of the idols, which just a few hours prior we protected with our lives from any damage......
Other than environment issues, it raises some questions in my mind about our commitment to our 'guest' at home for ten days in the form of the idol. If we can behave in this manner towards Ganapati then other irresponsible human behaviour currently the norm is a forgone conclusion.
Ganesha is a 'Vighnaharta' 'Sukhakarta' 'Dukkhaharta'. God does not expect anything in return yet we ply him with flowers, modak, silver and gold ornaments. Celebrations become grander and more opulent each passing year. Yet we do not think of the idol once the 'uttar puja' is done.
Surely there has to be some solution for the 21st century. Religious experts must offer some solution.
Posted by Archana