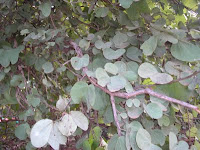 In Maharashtra there exists a practice of exchanging 'apta' leaves. As always there are several mythological stories associated with this custom, but we shall talk about that another time. Today, the focus is on the tree. In view of extensive tree cutting going on presently, several nature lovers advocate against this practise. I wouldn't blame them as people usually end up defoliating almost the entire tree and ruthlessly break up branches. It would take another year of growth before the tree regains its glory and by then the next festival is upon us.

Often the more common Kanchan (Bauhinia variegata) is mistaken for the apta (Bauhinia racemosa) tree and meets the same fate. Usually Kanchan is in full bloom in this season but that does not deter enthusiastic Puneites who get taken in by the similar looking two-lobed leaves. Click here to read more about the Bauhinia racemosa (apta). This plant also has several medicinal uses.

Apta trees are still to be found growing in some parts of Pune. Many farmhouses around the city too have this tree growing there. The above photo was taken at one such farmhouse.
Plant a tree. Make your city green.
Stay well!
Posted by Archana

Thank you for the information about the apta tree. It is insensitive of people to strip the trees of their leaves in such a callous manner. But I am intrigued by the mythilogical story behind the exchanging of apta leaves.
There's always something new to learn everyday!

I have come with an idea, Intead of giving Apta Leaves why not give chocolate in apta leaf mould so that people can enjoy the chocolate and give apta leaf also;)