Last week Puneites were spoilt for choice on what to do on the weekend. There was something for the foodies (the Bhimthadi Jatra) and the geeks as well (the IT expo). The Bhimthadi Jatra held on the grounds of the Agriculture college was a showcase for women's Self Help Groups (SHGs) in Maharashtra. There were over 500 stalls by women entrepreneurs and there are no prizes for guessing what most of the stalls were devoted to!
That's right Food!!

And what a variety! Absolutely Desi (and I mean from the Marathi heartland) stuff cooked in the authentic manner right in front of you. Fish, chicken, mutton, bhakri, bhajee and more.. served piping hot by ladies who were keen to show that had what it took to run a business even if they were rarely featured in glossy business mags. The best was each took pride in what she did had a good idea of the economics involved and had good marketing skills. I guess there's more than one place to learn business skills other than ivy league B-schools and that's the school of Life!

But here is something that was my star of the foodie stalls. Khandeshi Mande stuffed with Puran. To the uninitiated these are huge (around 18" diameter) puran poli that reach this size not with a rolling pin but by actually stretching it out by hand.

There were two stalls and we had to book and await our turn to get the Mande. Each was priced at Rs 35 but the process of watching the ladies make it was a delight. You may have heard of pizza makers who throw the dough up in the air while making the base. Well the process here is something similar. After stuffing puran (bengal gram cooked with sugar and ground to paste) in the dough made entirely of maida (refined flour) the artist (yes, that's the only word for the lady making the Mande) initially rolls out a small poli. Thats when the magic starts.

She picks up the poli and begins tossing it in circles over her both her arms as it gradually stretches into a bigger circle. A few minutes and the poli is big enough to be placed on an a huge upturned kadhai (wok) that serves as the griddle. A couple of minutes cooking on either side and lo behold! The Mande is yours! Thin crisp golden with not single tear in it. Drizzle (or drench) with ghee and enjoy!!!

This fair was the fourth one to be held in Pune and hopefully will continue each year. For those who missed it, Bhimthadi Jatra may return.

Here are some photos that will give you an idea of how the Khandeshi Mande were made. 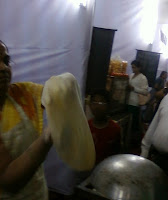 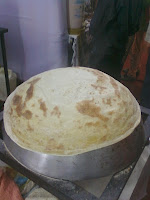 Email ThisBlogThis!Share to TwitterShare to FacebookShare to Pinterest
Labels: Consumer is King, Foodie delights, Khatta Meetha, The power of XX