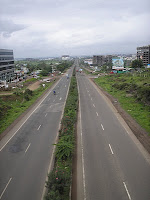 Recently I travelled on the Mumbai-Pune expressway at night. This road has been a boon to people in both cities. When it was first operational the wide multi lane concrete super smooth track seemed something straight out of a 'phoren' country. Lanes reserved for heavy vehicles each with their own toll both, helplines (thankfully never had to check if they worked!!) some landscaping to soothe the eyes in the blazing summers, well lit and ventilated tunnels just to name a few.

Traffic too seemed to be following the rules.

Things have considerably now. Most infrastructure mentioned above continues to be fairly respectable. Its humans who no longer want to cooperate.

We were returning to Pune at midnight. The journey to Lonavala from Chembur was a nightmare. Firstly the traffic was choc-a-bloc- partly due to some road repairs. Thereafter trucks and other heavy vehicles were travelling in lanes not meant for them. They were all over the road instead of their alloted lanes. So we had four lanes of trucks, each vehicle bigger than the one on its left. Lets say the one in the slowest lane moved at 25kmph, the next one could be container carrier trying to overtake this one at 27kmph, the next lane had a huge tanker also in the 'race' and moving faster at 28kmph. The supposedly fastest lane had a huge trailer carrying steel cables that jutted out from behind (and without lights) and trying to win this unscheduled event.

This left other 'smaller' passenger vehicles with no option but to slow down and follow them- something not many drivers did. Instead they chose to move to the shoulder of the road, and move slalom style between these behemoths to get ahead.

We tried to get our driver to slow down but if we finally did make it ahead, there was yet another truck three-some or four-some in their own private race. Our driver said this is a normal occurrence daily particularly between 12 midnight and 3AM. Traffic thins out thereafter.

Yet another danger was drivers falling asleep- I know ours was... Despite having been on the expressway road often, this was the first time I actually felt threatened and insecure.

We read of several tragic accidents on the expressway many may be avoidable. So whether you are driving yourself or are driven by your driver or you are in a hired vehicle please take all efforts to stay awake and keep the person at the wheel awake. The person in the front passenger seat MUST NOT doze off. This was the only time I was grateful for the blaring music in the car stereo- helped keep eyes open...

If traffic situation is common knowledge, surely the concerned traffic police must know too? What are they doing? Errant truck drivers must be punished for 'playing' with their own and others' lives. Its better to arrive late than not arrive at all.

This is the Mumbai-Pune Expressway, not the expressway to the other world....
Posted by Archana

Do you have copy writer for so good articles? If so please give me contacts, because this really rocks! :)

Thanks!
I write my experiences on this blog! Keep visiting..
:)