Overcoming considerable hesitation I went for the first day of the 58th Sawai Gandharwa Festival being held at New English School, Raman Bag Pune. Obviously reached late but enjoyed every second of what was in store for me and thousands others. I am sure you will find many articles that will analyse fine musical aspects of every artist's performance, this post is anything but that...

The Kabir Nirguni bhajan by Bhuvanesh Komkali pierced the deepest layer of my soul - mind you normally I would never go to such superlatives but his performance demands it. This is the link to the original rendition by Kumar Gandharva: http://www.youtube.com/watch?v=f5Vlsdv_z0s

Many of us (self included) may be puzzled by the magic of Lord Krishna's flute. Can breathing into a hollow wood pipe really create such power over people's emotions? My doubts were fully eliminated with Pandit Hari Prasad Chaurasia's performance yesterday. I have heard his music before but mostly on a CD or the television. Age has not curbed his creativity as the melodious and powerful strains subtly calmed the several thousand strong crowd. No one spoke as one and all surrendered to Panditji's magic.

By now it was about 945PM and Pune Police are quite strict about the 10PM deadline for public concerts. It was difficult to decide who was more disappointed- Begum Parveen Sultana or all of us as she was given less than an hour to perform. But this very constraint seemed to bring out the best in the Begum as she captured and held the audience enthralled right from her opening notes. That is what mastery over a skill is all about.

I hope artists' on subsequent days can live up to the high bar set on Day one.
I hope in future the organisers learn to manage time better and ensure that all artists particularly senior ones get sufficient time to present their art.

This year the event organisers have installed a new type of music system. To get feedback about it the 'sutradhar' shared his cell number and then as expected was inundated with a barrage of text messages asking to switch off fans, requests for songs, sound issues etc...

As usual there was a veritable feast for foodies as the line up included modak, puran poli, thaleepeth, karanjee just to name a few...
Here is a photo of the event.. 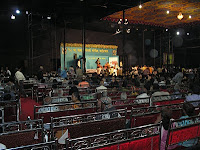 This is the link to the Mahotsav website: http://www.sawaigandharvasangeetmahotsav.com/
Don't be satisfied reading this post. Go out and experience this one of a kind event.
Cheers!
Posted by Archana