Konkan has emerged as a popular weekend getaway for people from western Maharashtra and those from other parts as well. The west coast of Maharashtra is well known for its beaches and mangoes and cashews and temples. That's for tourists. Konkan is a rich bio diverse habitat and there are over 1500 endemic species growing here. Despite being quite near we had never managed to visit that coastal belt other tourist destinations always won hands down..
So when the first opportunity presented itself in form of a study tour to the Konkan I did not hesitate for a second. 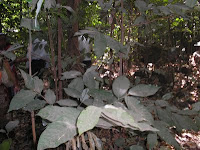 And there we were a motley group of nature lovers right from over 60 years-young to twenty something-years old. Armed with sturdy shoes, caps, water bottles, lens', cameras, field guides and most of all knowledgeable instructors, we trudged across hill and vale, sand and stone in the blazing May noon sun, We looked at and learnt about the majestic tall and at times small flora growing there. Each told its own story, held its own place in the history of the evolution of the plant kingdom. Even a tiny pool of water on a depression on a rock held a tiny ecosystem. 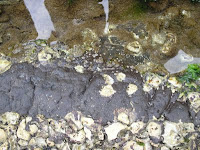 As they say, to really 'find' good material for a bonsai, the place to look is not the front rows of nursery plant displays. One has to check out the trees languishing at the back that no one really bothers about. Similarly to see diverse habitats and plant types, move away from the tourist attractions on a beach to the low tide, near the rocks and the edge of the sand. And then see what treasure awaits you!

The bare rock was a lateritic plateau that was seemingly bare. Note 'seemingly'. One shower was all it will take to get the hidden herbs to spring to life. The monsoon months are said to be a pure delight with a changing colourful kaleidoscope every week as each and every plant blooms. The same phenomenon is seen at Kaas pathar- an otherwise bare stony region.

And how can one forget mangoes? and cashews? Several residents of Konkan have thrown open their homes or some have created spaces specifically for 'city folk' so as to get a 'taste' of living among mango trees - inside a mango grove...

Many villages in India have what are called 'sacred groves' (devrai). Its a subtle method to conserve nature and biodiversity. We did walk through a couple of them and the experience is quite something. There are parts where the sunlight does not reach the soil even as the air is filled with bird and insect sounds. Clamber over rocks, several inches thick layers of dead leaves and twigs to reach an amazing buttressed roots of Ficus nervosa or a dry looking fern called Dryneria or orchids blooming unassumingly high on tree branches, just to name a few...

The bottom line: do visit foreign lands, other parts of India but before that take your next holiday to visit the interiors of your own state and try to understand local culture. There is much to learn...
Cheers!