While there is general increase in 'green' activists their voices are most markedly heard prior to and during Ganesh Utsav- especially in Pune. The reason obviously is that the idols (usually made of 'shadu' - river mud) and the nirmalya (flowers and other offerings made to the God) have to be immersed in water. Though Pune is proud to have not one but two rivers that flow through it, they have dams built upstream to provide water for the burgeoning city and irrigation. Hence the rivers usually are a little better than a trickle of murky stinking water or at times covered with Hyacinth. The authorities usually let off extra water into the river from the dam at the time of Ganesh Visarjan.

People are urged to avoid idols made of plaster of Paris, instead use idols made of shadu that are supposed to dissolve easily once immersed. There are workshops galore wherein people make and then worship  their own shadu idol. On Visarjan day, the authorities and activists urge people to immerse idols in specially erected ponds/tanks so as to protect the river.

Yet I am not sure that only using shadu idols is sufficient to overcome the challenges. Even if the idols do dissolve as they are meant to, who manages the piles of shadu that now collect in these ponds and how?  Can our river take this additional load? The PMC is already struggling to deal with garbage generated by the city.
Is there any other option?

This Times of India article mentions that 14516 idols were immersed in artificial ponds on the final day at 14 spots in Pune alone and the SWaCH has collected 90 tonnes of nirmalya.  I am not sure if these figures include immersions made on the prior days and those actually put into the river. Yet the figure seems miniscule considering Pune's population of several lakhs. The nirmalya can be composted but what about the idols? This is an extremely disturbing article in the Pune Mirror that describes how idols were thrown into the river from the ponds under cover of darkness.

While the scriptures mandate an idol made out of mud, the current conditions force one to think. Is there any way in which individuals can take care of their idols from home itself after the Uttar Pooja instead of depending on the local authorities? 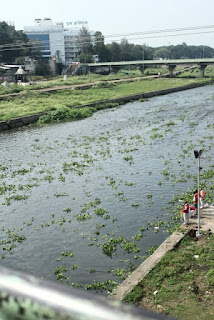 Here are a few ideas and I have provided links to published articles where ever possible:
Any more ideas?
Pessimists may well ask if one family (one idol) can make any difference at all. But surely every bit counts and the success of this effort can inspire others...
Think about it..
Archana
Posted by Archana

Email ThisBlogThis!Share to TwitterShare to FacebookShare to Pinterest
Labels: Around the city in a MH-12..., Personal Freedom, Travel Bug