Adi Parva
Churning of the Ocean
by Amruta Patil

I have always found it fascinating to read stories written from a different perspective. After all the other view point may actually change the entire way we 'see' things.

Mahabharata is on our ancient texts and all of us have heard it in bits and pieces in the form of different stories. Lord Krishna's dialogue with Arjun on the battlefield is commonly taught and explained as a standalone piece. Every reader can find their own perspective.
Yet each character in this epic has his or her own story which is often not told hence not commonly known. Adi Parva by Amruta Patil is a story told by a woman narrator, the River Ganga. It presents the epic to us from the viewpoint of the women therein.


Gandhari who blindfolded herself when she was married to the blind Prince Dhritarashtra who later became King of Hastinapur.
The unmarried Kunti (called Pritha in her childhood) who gives up her first born.

The book is rich with colourful picture panels that powerfully express the author's thoughts. I must add that this is not a text heavy book which makes totally unusual. I bought the book on Flipkart but it may be available in the major bookstores as well. It takes time to digest the conveyed ideas but well worth a reading. 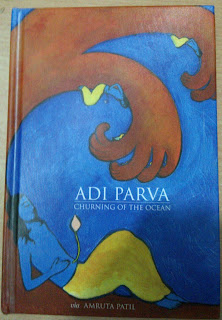 Email ThisBlogThis!Share to TwitterShare to FacebookShare to Pinterest
Labels: 2013 AtoZ, Books I have read, Personal Freedom, The power of XX

My Writing Blog
My Life Blog

Hi, I'm Sherrey from Healing by Writing joining you in the challenge this month. Enjoyed reading your post and like that you are interested in the perspective from which a story is told, especially the female perspective.

Sherrey at Healing by Writing

Sounds pretty cool. I might have to look this one up.

Looking forward to seeing what you do all month.
--
Tim Brannan
The Other Side and The Witch
Red Sonja: She-Devil with a Sword
The Freedom of Nonbelief

Thank you Misha, Sherrey and Timothy!
:)