Its a veritable treat to watch them in action but it can be auditory nightmare for some. Yes , I am referring to the Dhol pathaks that are a standard and now important feature of Ganeshutsav in Pune. Participants-  both boys and girls each of whom plays either the dhol or other percussion instrument they have practised for a couple of months come rain or sun.  Dressed in simple attire and they walk the entire distance of the Ganesh immersion procession. They are totally possessed by their drum beats oblivious to the vibrations of their drums and the high decibel beats that they create. 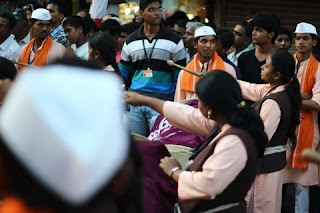 Yes, these Dhol pathaks are always in the news for the 'noise pollution' they create and less for the tradition they represent. The dailies devote almost equal space to articles and photos that 'glorify' these pathaks and articles that describe how 'bad' the dhol beats are for our ears, for the participants' ears and indeed for our entire body. According to this article, a typical 28-inch dhol generates sound in the 3-4Hz and tasha in the 3-22Hz range (peaking at 11Hz).  This Times of India article (published on 11 Sep 2013 in Pune) quotes audiologist Kalyani Mandke as saying "Long term exposure to these vibrations can affect a person's circulatory and/or urological systems. The person playing the instrument is at highest risk, but people in its vicinity cannot escape its effects either." Read it for more details about a study that describes ill effects of vibrations and frequencies on the human body.

Being a health professional, I understand the gravity of the situation. Just under an hour at a dhol practise venue left my ear drums in a protective 'shut down' for two hours. Some of the beats actually cause a wierd feeling in the chest (probably due to the vibrations mentioned in the above article).

Does that mean the 'Dhol tasha' are to be eliminated all together? Do we let this tradition die?
On another note, I would like to know if DJ's also face similar health hazards? Or technicians who work near aircraft on runways? I have seen them use ear defenders at civilian airports and at military bases where we were posted. And what about people who work with heavy-duty drilling equipment?

Drums Circle is a new trend that is used for team building and stress relief and it has immense therapeutic value as well in differently abled children. Obviously the sound levels there must not be as high as created by the dhols. 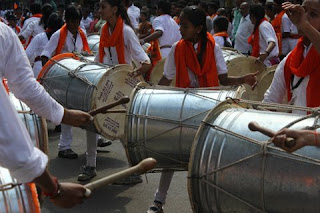 Is it possible to use some kind of ear defenders that will afford some amount of protection and allow the dhol to be played in a safer manner? Instead of criticising and rejecting the dhol tasha, should we not try to find a golden mean? Ideas anyone??
Think rationally.
Preserve our heritage and culture and stay healthy!
Cheers!
Posted by Archana

Email ThisBlogThis!Share to TwitterShare to FacebookShare to Pinterest
Labels: Around the city in a MH-12..., Health is Wealth

Here is an interesting article that suggests that "moving in time to a steady beat is closely linked to better language skills" http://www.bbc.co.uk/news/science-environment-24124158

Anything above 80 decibels exposure for prolonged time interval can cause deafness effects are seen after some time maybe years, in the developed world like US or Australia strict safety rules apply in industrial zones for protection from noise by wearing ear plugs, proximity to the sound is important which is very close in case of a dhol a DJ wears headphones if very near to speakers