Sawai  Gandharva  Bhimsen  Mahotsava is a much awaited, annual musical festival in Pune. It’s prestigious for the artists performing there but from my experience getting tickets for the ‘chair’ can be something of a prestige as well. Not for the money, no… The ‘sofa’ seats are priced much higher.

The reason is the efforts that go into procuring the tickets. For some reason, tickets are only sold at a few select outlets in Pune, and as of 2013 there is no online option for ticket sales.
Seating is in three categories, ‘Bharatiya baithak’ (sitting cross legged on the ground- usually covered with sheets) ‘Chairs’ and ‘Sofas’. These are in increasing order of prices.

Each sofa seats three people and those with well-lined pockets may find it economical but the ‘source’ of these sofa tickets is a closely guarded secret. Probably a single phone call suffices if you know whom to contact. A decade in Pune yet I am totally in the dark about ‘getting’ sofa tickets. Probably I need to change the social circles that I move around in… 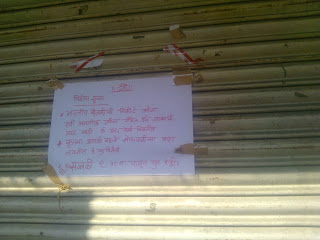 Tickets for Bharatiya baithak are freely available and there is no space reserved for you by the organisers. It’s up to you to reach the venue sufficiently early to spread your own ‘sheet’ thus ‘reserving’ that space for yourself and your group. The others can come in later armed with bolsters, pillows, snacks, warm clothing, reading material, iPod, iPad, knitting or whatever they need to enjoyably spend the following five hours of that day.

Now for the chairs.. Priced at Rs 2000 this year, the season ticket entitles you to sit on a specific Chair for all four days/five sessions. If you think you can stroll in post-breakfast at one of the outlets to purchase a ticket then Good Luck to you! Let me narrate what happened at one of the ticket outlets this year.

This store opens only at 9.30 AM and it’s a poor idea to go there comfortably post-breakfast to buy your tickets. Since there are a limited number of tickets to be sold, one can return empty handed after 11ish in the morning (we have faced this earlier).  Enthusiasts gather there from the wee hours itself to get the coveted tickets. We reached at 4 AM (it seemed an early enough hour) but found ourselves to have been beaten by 9 others! Now remember what seems like nine may be more because one person may stand in for two others who come by later at a more human hour!

As Sunrise approached the line slowly became longer. Unluckily the tapris located nearby that would have provided much needed chai were demolished just the previous day by the Anti-encroachment squad.

The lucky ones had someone to 'replace' them so they could go home for tea and breakfast. Some had their domestic help reach the store 3 or 4AM and came themselves just as the TV reporters arrived! That was some timing!

By 7AM there were about 25-30 people and healthy conversations ensued about merits of the performing artists. This is Pune and everyone has an opinion. The queue took the form of an amoeba that kept changing its shape to accommodate the sweepers or the delivery vans to the stores. All were hopeful and time passed quickly. We were quite sure this ‘shape’ would align itself into a proper single file come 9.30AM.

As the golden hour approached, every incoming vehicle or person was suspiciously viewed to be the one bringing the goods. Four hours had flown by but the last few minutes seemed to drag on... A mini truck came by, it was surely too big to be carrying tickets?? Another gentlemen came at about 9.15AM on a scooter with a huge bag - that seemed more likely and he had a very official bearing as well. Minutes went by but he kept standing by his vehicle. Our eyes followed his every move and then suddenly he took out packets of Chivda and began counting them…. 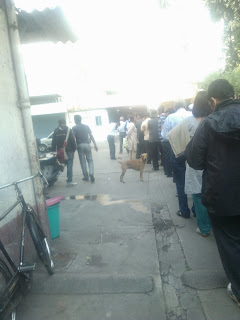 The clock hands crept past 9.30 but the shutters of the shop stayed firmly closed. Did the notice mean 9.30 AM on 05 Dec 2013 specifically?  Someone noticed that the shop had a rear entrance and some sounds could be heard from the inside. Yeah! Word rapidly spread down the line (yes we were in a queue now) that the store is about to open. After all this while, every second seemed like hours now. Many minutes later the steel frame still stared at us.

By now there were about 60 odd people and Murphy too had arrived!! The store owner came before us, apologised to say that he had lost the store key and ‘could we please wait some more?’

Even before these words were conveyed to the last waiting person one of the early birds produced a key from his pocket “Is it this one?”

The rattled owner gratefully took it and the gentleman explained that he had found the key at the doorstep of the shop when he reached there at night. Assuming it to belong to one of the owners he kept it aiming to return it in the morning. The entire group heaved a palpable sigh of relief!

If it were not for this very honest gentleman our wait would have prolonged further!

The officials soon set up their stuff and ticket sale proceeded rapidly. Just as it was our turn, two very old and frail ladies turned up requesting to be given tickets out of turn citing senior citizen privileges. When asked one of them said she wanted two tickets. No one had the heart to turn down her request. Gratefully she went in and asked for four tickets! Now would the second lady go in too?

No, she did not, and the duo left thanking every one… We got our tickets and returned home triumphant. There was only a small stack of tickets to be sold and I hope everyone in the queue got what they wanted.

I guess this too is a part of fully enjoying the Sangeet Mahotsav!

Here is the link to the Mahotsav website: http://sawaigandharvabhimsenmahotsav.com/

But in this day and age, why can there not be a more user friendly method to sell tickets? If it already exists, then music lovers should be informed about it.
Agree?
Posted by Archana

Email ThisBlogThis!Share to TwitterShare to FacebookShare to Pinterest
Labels: Around the city in a MH-12..., Khatta Meetha, Travel Bug