This is my first attempt at a food post... As I have openly stated, I am a reluctant cook and I have jumped into the bloghop mainly for the food memories! And there are so many, and surprisingly the ones that stand out are the disasters

However, today I would like to share one of our projects.. one that was we had no choice but to execute and do it well.. The ladies of our unit had to put up a food stall with two items- Bhel and Pizza. For two whole days. A huge crowd was expected. Pizza delicacy was in those days.. way back in 1993... especially in the remote base in the NE where we were posted.

The local bakery would make the base but during the trials, we faced the most unexpected difficulties. Rings of capsicum dried out and the sulfurous odour of the onions was  quite unbearable. Spending two days in its company was quite unthinkable. Plus with limited space, we could not accommodate many containers. None of us were keen to freshly chop the veggies on a need-based basis.

Our plan was the do the entire preparation at home and just grill the pizza when ordered.

Necessity is the mother of invention - it is said and that is what happened to us.

We came up with the idea of putting all veggies together into the tomato sauce. What we finally had was a vegetable puree that we just had to pour on the base, top with grated cheese, grill and serve.  All flavouring spices too went into this sauce. The pizza was a big hit!  We ran out of sauce by mid afternoon and had to make fresh batches many more times on those two days till we ran out of pizza bases! 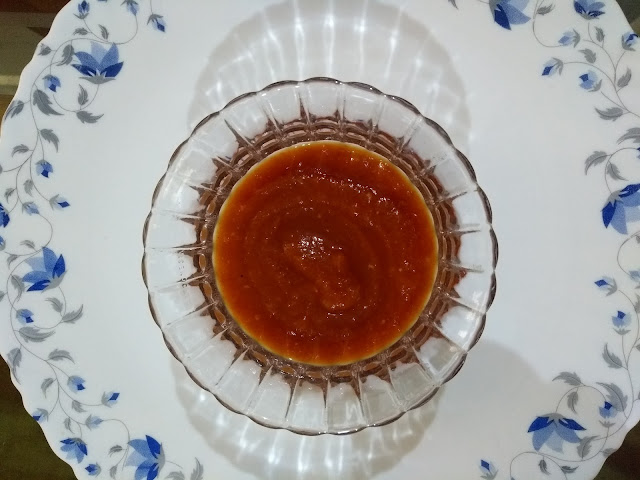 To this day, I make my pizza sauce in the same manner. Any leftover is stored in the fridge is reused as pasta sauce. In fact, I add it to vegetable gravy to get an interesting taste. My daughter has continued with this method so I guess, it has its merits one of the main ones being saving the effort of finely slicing the veggies.

There is no fixed recipie - but here goes.. You can improvise according to your taste - increase or reduce the tomatoes or onions or garlic or capsicum or Ajwain

Chop the veggies, mix with other ingredients and cook on a slow flame till done. Reduce till seiredd thickness. Cool. Grind in a blender to get a smooth puree.

Pour this on a pizza base, spread grated cheese, dot with butter. Grill in a hot oven and Viola.. the tastiest pizza is ready for you!

We had not added mushrooms but I guess those can go in too..

How do you make your pizza sauce at home? Do you prefer separate toppings?

I am joining Sunita and Shilpa in #flavoursometuesdays which is on the first Tuesday of every month.

Email ThisBlogThis!Share to TwitterShare to FacebookShare to Pinterest
Labels: #flavoursometuesdays, Nation before self, The power of XX

Where there is a need there is a way!This one saying goes so well with your experience. That was a smart way out and I loved it . Let me try it out next time I plan a pizza lunch or dinner.

Waah! This is simply ingenious, and something not quite expected! I too love Pizza, but cutting and chopping the veggies can be such a pain. And, I am all for saving time in the kitchen, so I am definitely going to make my Pizza this way, when hubby isn't home! :P
Thank you for sharing this amusing anecdote, Archana! It's fun to read these stories...you can take away so much!

I also do the same way but I don't puree the sauce as I do whenever it is required. I don't freeze it. Good to know about your pizza memory through #FlavoursomeTuesdays.

Thanks Anagha! Do let me know how you like it :-)

Thanks Shilpa! Happy to join Flavoursometuesday! A reason to revive the days gone by....