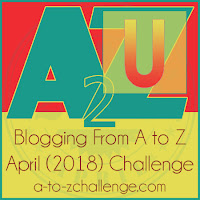 Welcome!
We are with the 2018 April AtoZ Blogging challenge and its my fifth attempt. For those who missed it, here is the link to my Theme Reveal post. Do the alphabets still stand for the same things we learnt about in Nursery school?

Its day twenty one and the alphabet is U.

Taxis were not a part of Pune's vehicle scene until maybe a couple of years ago. I have never understood the reason for this gap but Pune's narrow streets and relatively shorter distances may have been a factor. Plus cycling and walking have been an integral part of this city which has been considerably reduced now.

Recently app based hail taxis have become omnipresent. Uber is commonest name one sees emblazoned on the vehicles. Almost everyone including women (young and old), office goers, travellers and senior citizens has 'Ubered' to their destination - so much so that the noun has turned into a verb!

Travelling in a four wheeler especially when going to work or in summers is definitely a better option especially if it eliminates parking woes! Ola is a strong competitor to Uber in Pune and most people have installed both apps. Despite this rickshas continue to hold their own. According to a recent article Pune has more vehicles than its population...

Jokes apart its an environmental nightmare...

Still, if I dont want to drive all the way across the city, a taxi remains the best choice! And its just a few clicks away on your smartphone!!
So its U for Uber!

What is your experience folks?
Disclaimer: This is NOT a sponsored post!

Uber is my lifeline and I have used it in various cities and and at all odd hours too. Though I have had some bad experiences as well... One was a drunk driver, second was an accident and quite a few minor irritants. But by and large, I trust this cab service and also because Ola does not operate much in our part of the city.

Generally speaking, using some form of transit besides your own personal car is preferable, but Uber is always just taking one person or a small group, so I don't think you're helping the environment that much. At the same time, it saves wear and tear on your nerves, and in areas where taxis are hard to come by, they can be a lifesaver.

Surprisingly I’ve had a ‘bad’ experience with Uber . I once cancelled an Uber because it was obviously NOT going to come in 6 mins as it showed on the App simply because it took the wrong turn during Mumbai’s rush hour traffic .
But when I ordered an Uber in New Jersey, the App refused to accept my request until I paid up my cancellation fee of 6 months ago! And to think that the charge was Rs 47 !
I couldn’t pay by cash nor could I pay by card because my OTP came on my Indian SIM awhile my phone had a US SIM.
So eventually I had to call my daughter and ask her to book me an Uber !

@John Yes, there is always some advantage and disadvantage.. I try to choose the relative best option. Thanks for stopping by!

@bellybytes - we had the exact same experience recently in Delhi. The app kept asking us to pay for some earlier cancelled trip (we dont even remember which) but would not accept payment. Finally booked an Ola. Thanks for sharing your experience Sunita. We thought there was something wrong with our phone ...