Shrikhand or Mishti Doi: Who wins?


Dahi is an integral part of our Marathi diet. We eat it just by itself or with sugar added (dahi sakhar) or churned up into 'taak' (buttermilk). To add value, it is drained of excess water and sweetened to make Shrikhand! The one and only supreme dish that is traditionally served as part of the meal but also lends itself to be served as a post-meal 'desert'!

Shrikhand and dahi have a permanent irreplaceable place in the hearts of Maharashtrians.

There can be no better combination... which is what I thought till I ate Mishti Doi. 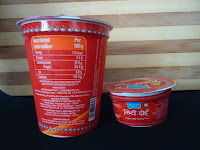 I first ate Mishti Doi on a train to Calcutta (as it was then called). The taste buds despite being trained to eating dahi sakhar, immediately recognised this as being something unique, something exquisite and worth investigating. We relished the real stuff when in East and the taste still lingers...  Mishti Doi is made from thickened sweetened milk that is set with a starter culture.The treacly sweet and caramel coloured final product easily dissolves in the mouth to transport you to foodie heaven... 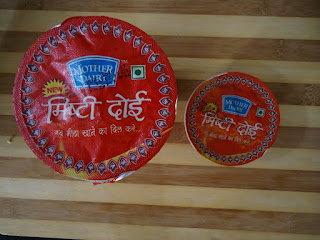 Try as I did, I was unable to buy it in Pune and could not make it at home either. I am told that its rarely made at home in its home states (West Bengal and Orissa) as well. The authentic Mishti Doi needs to be set in mud tumblers. Stalls at the local Durga Pooja celebrations drew a blank in my search for this 'cool' dish. The umpteen tiny stalls offering 'Bengali food' offered that did not impress me at all.

Sourcing Mishti Doi in Pune had become an unfulfilled wish, till recently. I was pleasantly stunned to find Mishti Doi by Mother Dairy at Reliance Retail outlet in Shahakar Nagar. This may not taste exactly like the original stuff from Kolkata but for starved souls like us its a good replacement! Further, it was being sold at a promotional price that was half the printed MRP.

At 179 kcal per 100 gms (nutritional info from the ready to eat Mishti Doi with Calcium and Protein thrown in) this would not send me to Diabetic Hell either.

Naturally we bought all packs available there. I then began an unsuccessful search in other such 'super markets' only to be stumped.

Had I dreamt of my purchases? When pinching myself did not work, I revisited the above mentioned outlet and lo and behold. Standing on the fridge shelf were few bright red packs of Mother Dairy's Mishti Doi both large and small sizes but alas no more promotional prices... Inquiries with the staff revealed that they received fresh supplies in the mornings and people usually waited for the fresh stock..

Does this mean Punekars have given up on Shrikhand?
Will Mishti Doi win hearts of the Marathi manooos?

Email ThisBlogThis!Share to TwitterShare to FacebookShare to Pinterest
Labels: Around the city in a MH-12..., Consumer is King, Personal Freedom

Both have a place! Win Win!!

Mishti Doi is far bettter than Shrikhand. I am neither marathi nor bengali....
Unbiased opinion !!!!

Mishti Doi is far bettter than Shrikhand. I am neither marathi nor bengali....
Unbiased opinion !!!!